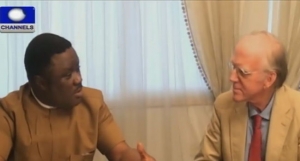 The Cross River State government and the United Nations have signed an agreement to conserve and protect one million hectares of forest reserve in the state.

The agreement was signed on Friday by the Governor of the State, Ben Ayade and the United Nations Chief Technical Adviser on REDD+ Programme, Allen Turner.

Speaking at the Governor’s conference room in Calabar the state’s capital, Governor Ayade said the Programme ”Green Police” would help create jobs for many youths in the state.

The Green Police is a team of young men and women who would be responsible for the management of the state’s forest to ensure an end to illegal lugging and also protect the forest in a way that it would give its full value.

“Cross River State today has come up with a team of architects to design a framework that will drive a new forest cover regime.

“To achieve this, it dovetails into my political ambition that we are going to create about 1,000 jobs for young men and women in a programme which we call the Green Police,” Governor Ayade said.

Mr Turner, expressed commitment to the project, with a promise of meet the international standard and expectation of the UN Climate Change Convention and REDD+.

He said that the UN would help the state frame the strategy in a way that it would meet the requirements and expectations of the international community and the 194 nations that have signed the UN climate change convention.