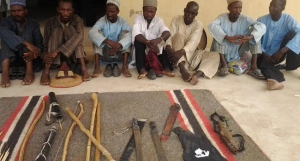 Parading the suspects to newsmen at the State Police Command in Damaturu, the State Commissioner of Police, Mr Marcus Danladi, said that the suspects have been carrying out various operations along the road which links Yobe through Jigawa to the commercial city of Kano State, northwest Nigeria.

On one of the occasions, according to the CP, the suspected robbers blocked the road and killed a driver conveying goods from Kano to Nguru as investigation by men of the Nguru Police Division later revealed.

He said that the arrest of one of the suspects led to the remaining six being apprehended.

Mr Marcus Danladi confirmed that all the seven suspects have admitted carrying out sustained robbery operations along the route.

The CP also said that on completion of the Police investigation, the suspects would be charged to court.

Items recovered from them include; one locally made pistol, bows and arrows, machetes as well as sticks.

CP Danladi called on the residents of the state to give the needed support to security agents, noting that with such cooperation, crime would be wiped off completely.

The latest parade of robbery suspects comes just three days after the Yobe Police Command recovered some arms and ammunition while on patrol of Bara, the Gulani Local Government headquarters.