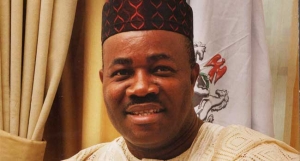 The Senate President, Bukola Saraki, has announced Senator Godswill Akpabio as the Minority Leader of the Senate.

Senator Saraki read a letter at plenary today, (Tuesday) submitted by the Peoples Democratic Party (PDP) caucus in the Senate which listed the names of the remaining principal officers in the Senate.

However, Senator Kabiru Marafa raised a point of order alerting the Senate that the nomination of Senator Godswill Akpabio violated the Senate rules on ranking.

But the Senate President ruled Senator Marafa out of order, after the Deputy Senate President explained that the constitution allows every lawmaker, irrespective of ranking, to aspire for the seats of principal officers.

The Senators afterwards passed a vote of confidence on the principal officers of the Senate and warned the Police and security agents not to be used by any person to blackmail Senators and their spouses.