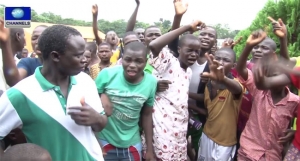 Internally Displaced Persons, who have found shelter and education at the Christian home for the needy managed by the International Christian Centre in Edo State, have rejected a government plan to relocate them to Kano and Jigawa.

They said the Federal Government should bring the help it intended to render to them to Benin City, as they were not willing to move.

The Internally Displaced Persons (IDPs) took the decision when about 40 buses arrived the camp accompanied by security officials, with an instruction to relocate them from Edo State to the north.

“Right To Live Wherever We Choose”

The news stirred an uproar in the centre, followed by weeping while some of the IDPS fainted.

They said they are comfortable in the centre and asked the security officials to leave them.

“Let them help those that are still suffering. Those hiding in the mountains. We that have been rescued should be left here. They should bring the help to us here,” one of the IDPs said.

“We are Nigerians and we have the right to live wherever we choose to live,” another said.

Over 1,400 Internally Displaced Persons are in Edo State housed in an IDPs camp in Uhogua camp in Benin City in south-south Nigeria.

Most of the persons at the camp are children numbering over 900 with the youngest said to be four months old.

Channels Television’s correspondent in Edo State, Peter Okonkwo, said a team of Nigeria Police , Civil Defence and Department of State Security arrived at the camp around 9:00am local time.

Addressing reporters after the IDPs voiced their displeasure with the plan, the Edo State Commissioner for Women Affairs, Maimuna Momodu, said she was not aware of the plan to relocate the IDPs even though the security team told her that the instruction was from the Presidency.

The IDPs have escaped from the volatile north-east where Boko Haram terrorists have sustained attacks on communities for over five years and they said they were not willing to go back to the north-east where they have been deprived of their freedom of movement and of their studies.

Counter-terrorism operations have been on to contain their activities.

On Saturday, the Chief of Air Staff, Air Vice Marshall Sadique Abubakar, said more platforms of the Air Force would be deployed to Yola in Adamawa State to boost the war against terrorism.

Air Vice Marshall Abubakar gave the hint on Saturday in Lagos during an inspection of logistics and facilities of the force ahead of the deployment.