Military Says Report On Killings In Kukuwa-Gari Not True 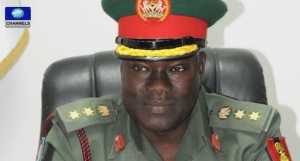 The military in Nigeria says the reported killing of about 50 villagers from Kukuwa-Gari in Yobe State in north eastern Nigeria is not true.

The news agency had reported that 50 people were killed by Boko Haram terrorists, many of them mostly women and children.

They had quoted eyewitness as saying that the gunmen were escaping bombardment from the military before they moved into the remote village of Kukuwa-Gari, opening fire on the villagers.

In a statement, the Defence Headquarters said: “The truth of the matter is that the military got an intelligence report concerning a planned attack by Boko Haram on Kukuwa-Gari village in Yobe State.

“The insurgents ran into them and a gun-battle ensued in which four Boko Haram members and one civilian JTF lost their lives”.

The military further stated that at the end of the encounter, 2 x AK 47 rifles and 2 x motorcycles used by the Boko Haram terrorists were recovered from them.

In the statement, the Armed Forces implore the media to always seek clarification of stories before going to press, as most of these unsubstantiated reports tend to embolden or encourage the terrorists to believe they are invincible, thus instilling perpetual fear in the minds of the citizens, especially, those in the contested areas of the North East.

“The military is doing all within its power to protect lives and property of Nigerians in any part of the country and thus, solicits cooperation and understanding of the media to be partners in progress in this noble task,” the statement further read.