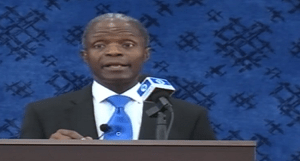 Vice President Professor Yemi Osinbajo has said some of the past policies and planning, including budgeting of the government, did not reflect the needs and the conditions of the majority of the people in Nigeria who have become disempowered in the process.

At a meeting with members of the Alumni Association of the National Institute for Policy and Strategic Studies, on Wednesday, at the State House, Abuja, the Vice President said the important thing now was how policies could address the need of the people.

“This is the main challenge,” he said.

Professor Osinbajo observed that some past planning, policy formulation and budgets were not accountable to the people, stressing that in the past there have been “policies that do not seem to have solutions that truly reflect the understanding of the question of poverty in Nigeria”.

He challenged the notion that a country could be described as rich when about two-third of its people are extremely poor.

While expressing concern about extreme poverty in Nigeria, Professor Osinbajo restated that records had shown that Nigeria had 110 million poor people, representing two-third of the Nigerian population, who he said had become disempowered based on the kind of policy formulation that had been going on in the past.

Professor Osinbajo further stated that one of the challenges of policy formulation was how to speak to the people and how to address their plight.

“The people are concerned about how do I get a meal, how do I get healthcare and how to send children to school. When you look at the budgets it does not often address the needs of the people,” he stressed.

The Vice President then urged members of the alumni association to discuss how policy formulation ought to have root in the conditions of the people.