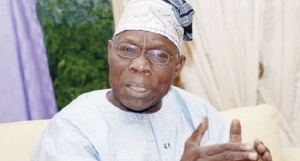 Nigeria’s President, Muhammadu Buhari, has sent a former President, Olusegun Obasanjo, to Guinea Bissau, as his Special Envoy, to mediate and help find a solution to the crisis brewing in the West African nation.

The Nigerian President had raised concern over the unfolding political situation in Guinea Bissau following the dismissal of the Prime Minister, Mr Domingos Simoes Pereira and his cabinet by President Jose Mario Vaz.

According to a statement by a spokesman to President Buhari, Femi Adesina, former President Obasanjo embarked on the first leg of his mission by consulting with the current Chairman of the Economic Community of West African States Authority of Heads of State and Government, President Macky Sall of Senegal in Dakar on Thursday.

“It is regrettable that while Chief Obasanjo was still consulting with President Sall, President Jose Mario Vaz of Guinea Bissau proceeded to appoint and swear-in a new Prime Minister in the person of Mr Baciro Dja, a development that has worsened the political situation in his country,” President Buhari said.

He further appealed for calm and called on the leadership in Guinea Bissau to exercise utmost restraint and ensure the maintenance of law and order as efforts continue to resolve the current crisis.