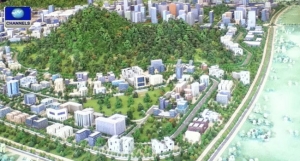 President Muhammadu Buhari has expressed confidence that the Centenary City in Nigeria’s capital city, Abuja, will create more jobs and add immense value to the overall development of the oil-rich nation.

The President made the statement on Friday after being briefed by the Chairman of the Centenary City PLC on the progress of the project and the faith of the original inhabitants of the site.

President Buhari praised the Centenary City’s main development partners from the United Arab Emirates for having enough confidence in Nigeria to agree to invest about $18.5 billion in the project.

He was optimistic that the skills, expertise and vast experience that would be brought into Nigeria to build the Centenary City on the Dubai model, would also be of immense benefit to Nigeria.

“I looked forward to regular updates on the Centenary City’s development,” he said.

At the briefing, the Chairman of the company’s Board of Directors, General Abdulsalami Abubakar and members of its management team told President Buhari that the Centenary City would create about 250,000 more direct jobs in the Federal Capital Territory and about half a million indirect jobs, an assertion that President Buhari welcomed.

The team also told the President that all the original inhabitants of the site had been fully compensated, emphasising that the project would be totally private sector driven.

The Vice President, Yemi Osibanjo, who was also present at the briefing, said that the issue of the rights of the original inhabitants of the site acquired for the Centenary City had been of concern to the present administration.

At the meeting, the Managing Director of the Centenary City PLC., Mr Micheal Odenigwe and the Director of Eagle Hills Limited, Jnel Shakel, debunked allegations of fraud about the project.

The National Vice Chairman of the Peoples Democratic Party for South-South, Dr. Cairo Ojougboh, had written to the President, demanding a probe of the role of the immediate former Secretary of the Government of the Federation, Senator Pius Anyim, in the Multi-Billion Dollar project. The petition may have triggered the briefing, which is believed to part of a process aimed at assessing the project and the controversy surrounding it.

The Centenary City Project was initiated in the twilight of the past administration of former President Goodluck Jonathan.