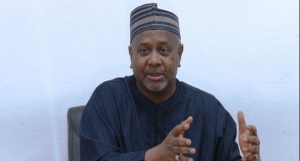 The former National Security Adviser, Sambo Dasuki, has been granted bail by a Federal High Court sitting in Abuja, the nation’s capital.

Mr. Dasuki, who was arraigned on Tuesday morning by the Department of State Security, (DSS) pleaded not guilty to a one-count charge of illegal possession of firearms.

Having taken his plea, Mr. Dasuki’s counsel Mr Joseph Daudu made an application for bail on self-recognition on the basis that the former NSA has served the country in a sensitive position.

He dismissed the fear that Mr Dasuki would abscond if granted bail, since his travel documents are with the DSS.

In his ruling, trial judge, Justice Adeniyi Ademola admitted Mr Dasuki to bail pending the determination of the suit.

He also ordered that his passport and any other document in the possession of any government agency be deposited with the Deputy Chief Registrar of the court.

The case has been adjourned to October 26.