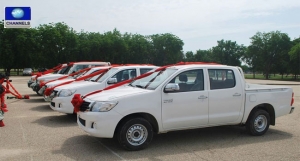 The Multinational Joint Task Force (MNJTF) in Maiduguri, Nigeria’s north-east, have received some Hilux Vans from Toyota Nigeria Limited, as part of support for its counter-terrorism operations in the region.

Receiving the donation, Nigeria’s Chief of the Defence Staff (CDS), General Abayomi Gabriel Olonisakin, expressed profound gratitude to the management and staff of the automobile manufacturing company, describing the gesture as a show of public support and approval for MNJTF actions.

“This donation is a laudable one and very timely, too. This shows that the fight against Boko Haram insurgency will come to an effective end going by the presidential directive. The provision of adequate security, not only in the northeast, but in all corners of the country is a task that must be done and done quickly too,” he said.

The CDS, who was represented at the occasion by Air Vice Marshal Olutayo Oguntoyinbo, promised that the Hilux vans would be used to ensure success of the operation against all forms of guerrilla movements and cross-border crimes around the Lake Chad Basin.

He urged soldiers to make maximum use of the vehicle and also asked other companies and corporate organisations in Nigeria and countries around the Lake Chad Basin to emulate automobile manufacturer in the noble gesture. He also called on all Nigerians to come forward and support the Nigerian Military in the ongoing campaign against terror.

In his own remarks, Chief of the Army Staff (COAS), Lt-General Buratai stated that the vehicles would be used effectively to achieve the three mandate of MNJTF which include, a defeat of the Boko Haram terror group in all the area they occupied.

“The Hilux van would be put to most effective use for the achievement of the three mandate of MNJTF namely, to defeat the insurgents in all the countries they exist whether in Nigeria, Niger Republic, Chad and Cameroon, and to facilitate the humanitarian and logistics needs of troops in the conduct of their duties by providing escort and security for them.

“The vehicles would also be used for the distribution of materials to IDPs and to re-establish state authority to create safe environments for those displaced to come fully back to their villages and continue with their day-to-day activities,” he stated.

The Managing Director of the automobile company, Mr Kunle Adeojo, said that all members of his management board had agreed to support the Armed forces through the vehicle donation, saying that “fighting against insurgents needs the support of all nations and all companies”.

On Wednesday the military in Nigeria said neighbouring countries have contributed 8,700 troops to the MNJTF on Lake Chad Basin towards ending the activities of the Boko Haram in the region.

President Muhammadu Buhari had given the military an ultimatum to end insurgency in the north-east by the end of 2015, but a bomb attack occurred on Friday at an Internally Displaced Persons camp in Yola, Adamawa State, the same day the MNJTF took delivery of the vans.

At least three persons were killed while about nine were injured.