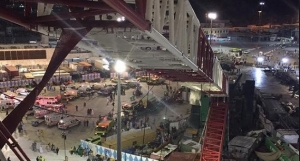 Chairman of the National Hajj Commission of Nigeria, Abdullahi Mohammed, on Saturday said three Nigerians were injured in the Saudi crane collapse incident that occurred on Friday.

“So far, we have identified three people that sustained injuries and they are receiving adequate medical care by the Federal Medical Team in the kingdom” he told Channels Television.

According to him, members of the Federal Medical Team‎ and the help desk of the National Hajj Commission are going round all the hospitals and mortuary where the bodies of the dead have being deposited, to ascertain if there is any Nigerian.

He noted that about 53,800 Nigerians have been airlifted into the Kingdom for the 2015 Hajj so far‎ with about 12,000 remaining, adding that “it is our hope and desire that we will finish the operation on or before 17th of this month, which is the official date for the closure of Jeddah airport”.

When asked if there was any death recorded besides the Friday incident, the Commission Chairman said that “there were reported cases of mortality,” but it has nothing to do with the incident.

“Some were diagnosed to have cardiac arrest, and some were hypertensive and some diabetic…so far we have six mortality,” he said.

Meanwhile, the Nigerian President, Muhammadu Buhari, has directed the Federal Ministry of Foreign Affairs and the Nigerian Embassy in Saudi Arabia to take necessary actions to ensure the security and well-being of all Nigerian pilgrims in the Holy Land.

hat no Nigerian pilgrim is affected or has been identified among those that lost their lives in the Saudi Arabia crane collapse. He maintained that investigation is still on.