Buhari In France For Talks With Hollande 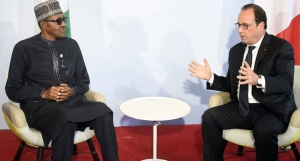 President Muhammadu Buhari has arrived in France for a three-day official visit that will involve talks with the President of France, Francois Hollande.

President Buhari was accompanied on the trip by the National Security Adviser, Major General Babagana Munguno, the Permanent Secretaries in the Ministries of Defence, Finance, Agriculture, Foreign Affairs and Industry.

Also on the trip are the Permanent Secretaries of Trade and Investment as well as the Chief Executive of the Nigerian Investment Promotion Commission.

The visit is at the instance of the President Hollande and the platform will be used for bilateral talks, discussions on Boko Haram, strengthening and consolidation of defence, security, trade and investment.

President Buhari will visit the Headquarters of MEDEF, France’s largest federation of investors and employers, where he would participate in a France/Nigeria Investment Forum with leading Nigerian and French entrepreneurs.

The President will also confer with the Chief Executive Officers of leading French multinational companies such as Total and Lafarge on their current and future investments in Nigeria.

His other scheduled engagements in Paris include a meeting with African Ambassadors to France and an interactive session with members of the Nigerian community.

The President will conclude his visit to France on Wednesday, September 16 and return to Abuja the same day.