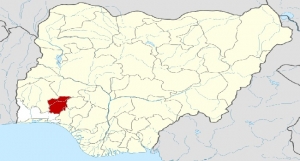 Lecturers working in Osun State-owned tertiary institutions on Monday stormed the State’s House of Assembly in protest of unpaid salaries.

Their latest march came after eight months of staying away from the classrooms.

The lecturers under the aegis of the Council of Academic Staff Unions of Osun State-owned Tertiary Institutions (CASUOSTI) also want out of the contributory pension scheme.

The Chief Whip of the House, Honourable Folorunso Bamisayemi, received the protesters and after much plea, calmed them and assured them that all issues concerning the salary would receive prompt attention.

The Governor of the State, Mr Rauf Aregbesola, on September 8 assured civil servants that they would be paid their outstanding salary arrears before the end of the month.

‎Aregbesola made the disclosure while speaking at the National flag off ceremony for the distribution of FGN/UBEC plastic chairs and tables to all the states in the country, in Osogbo, the Osun state capital.

He explained that his administration is committed to the welfare of its workers, and reassured that the eight months salaries owed them will be settled before the end of September.