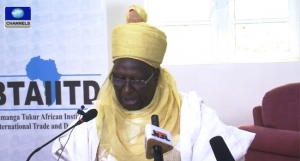 Mr Tukur announced his retirement from active politics on Tuesday at a gathering to mark his 80th birthday.

He advised political parties to maintain internal democracy in running their affairs.

The former PDP Chairman also called on political parties to check the frequent defections of their members from one political party to the other.

The event attracted local and international business men and women as well as politicians.

When Mr Tukur took to the podium, he reflected on his career as a politician before announcing his retirement from active politics.

“It is time to say goodbye to formal politics,” the former PDP leader said.

He decried the lack of internal democracy within political parties, including the main opposition party, the PDP.

Apart from commending his courage to quit active politics, politicians at the event said the exit of Tukur as chairman from the PDP contributed to the party’s poor performance in the last elections.

In a birthday message to Mr Tukur, the PDP describes its former National Chairman as “a quintessential democrat and humble statesman, who had contributed immensely to the development and stability of the nation”.

The opposition party said it remained proud that the octogenarian, who was one of its founding fathers, had made indelible marks in business and politics within and outside the country.

Mr Tukur was elected as the national chairman of the PDP in March 2012, but resigned under pressure in January 2014.