Dogara Condoles With Muslims Over Death Of Pilgrims In Mecca 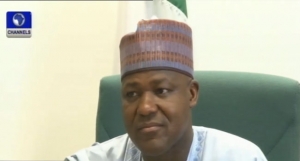 The Speaker of the House of Representatives, Rt. Hon. Yakubu Dogara, has condoled with Muslims over the death of scores of people in a stampede in Mecca, Saudi Arabia.

In a condolence message to the Muslim community issued by his Special Adviser on Media and Public Affairs, Mr. Turaki Hassan, on Thursday, the Speaker described the stampede as unfortunate.

“I am deeply touched by the tragic incident in Mecca during the symbolic stoning of Satan by pilgrims, which is the second such incidence in this year’s Hajj.

“My special condolence goes to families of Nigerian pilgrims who lost their lives in the stampede and the Nigerian Muslim faithful at large.

“I call on Saudi authorities to conduct thorough investigation into the circumstances that led to the unfortunate death of hundreds of pilgrims including Nigerians and take necessary measures to avert future occurrence.

“I also pray God to grant the families of the victims the fortitude to bear the irreparable loss and quick recovery to the injured,” he said.

Scores of pilgrims were killed on Thursday in a crush at Mina, outside the Muslim Holy City of Mecca, where two million people are performing the annual Hajj pilgrimage, Saudi authorities said.

Several others were also injured in the stampede, which took place on Street 204 of the camp city at Mina, a few kilometers east of Mecca, where pilgrims stay for several days during the climax of the Hajj.