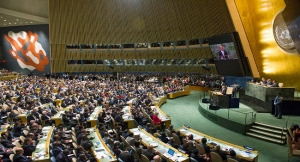 President Muhammadu Buhari, who arrived New York on Friday, has reacted to the Saudi Arabia stampede, describing it as a calamity, also commiserating with the families of Nigerians who died, alongside over 700 pilgrims.

President Buhari believes that the stampede at Mina which claimed the life of a Nigerian journalist, Bilkisu Yusuf, and one Professor Tijjani Miskin is very tragic.

The President ends his statement, taking note of assurances from the government of Saudi Arabia that such catastrophe will not happen again, and that this particular incident will be thoroughly investigated.

Top on the agenda as President Buhari holds talks with world leaders will be domestic developmental issues, bilateral relations, the war against terrorism, countering violent extremism, the enhancement of global security, peace-keeping operations, climate change and the adoption of a post 2015 global development agenda.

President Buhari is also scheduled to address the World Leaders Summit on Violent Extremism to which he was personally invited by Mr. Ban Ki Moon during the Secretary-General’s recent visit to Nigeria.