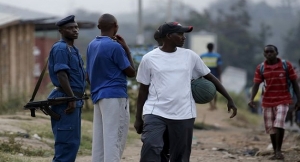 Burundi has expelled a senior Rwandan diplomat, officials said on Wednesday, in what is the latest sign of tension between the Central African neighbours that share a history of ethnic conflict.

Burundi was plunged into crisis six months ago, when President Pierre Nkurunziza’s announcement that he would seek a third term ignited weeks of protests and a failed coup. Nkurunziza went on to win a July 21 vote, but opposition groups have accused his government of a violent crackdown against them.

Rwanda, which endured a genocide in 1994, has expressed alarm about the situation in Burundi and its regional implications.

A Permanent Secretary in Burundi’s Ministry of External Relations and International Cooperation, Salvator Ntacobamaze, said that the diplomat, Desire Nyaruhirira, had been expelled but declined to give any further explanation.

Government spokesman, Phillipe Nzobonariba, said that the expulsion was most likely due to the diplomat’s alleged contacts “with putschists hosted in Rwanda”.

Opposition groups have accused Burundi’s government of launching a crackdown since May, when crowds first took to the streets saying Nkurunziza’s bid for a third presidential term was unconstitutional.

Burundian security personnel have been accused of conducting frequent raids in parts of the capital Bujumbura that are known to be opposition strongholds.

A row broke out this week at a prison in central Burundi after police tried to move 28 prisoners tied to efforts to topple Nkurunziza into isolation. Inmates blocked the police from entering, while opposition leaders said they feared for the prisoners’ lives.

The police on Wednesday succeeded in isolating the 28 prisoners, prison officials said, with no deaths reported.