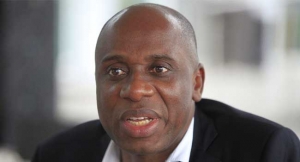 The Rivers State Government has presented a white paper demanding the immediate prosecution of the former Governor Rotimi Amaechi and all persons involved in what the government called fraudulent transactions.

This is following the report of the 30-day sitting of the Justice George Omeregi led Rivers State Judicial Commission of Inquiry, set up to investigate the sale of state assets.

Members of the State Executive Council presented the white paper to journalists in Port Harcourt, the Rivers State capital.

The Commissioner of Housing in Rivers State, Emma Okah, who spoke on behalf of the State Government, told journalists in Port Harcourt that the state’s Attorney-General has been mandated to start all legal processes against former governor, Mr Rotimi Amaechi; a former military administrator of Rivers State, Brigadier Anthony Ukpo (Rtd) and some other former political office holders to refund over 97 billion naira allegedly misappropriated in the sale of the state valued assets.

The Commissioner of Housing stated that the issues of illegality cannot be swept under the carpet.

“The commission finds as a fact that the sale of 70% equity from the First Independent Power Limited in Omoku gas turbine, Trans-Amadi gas turbine, Afam Phase I gas turbine and Eleme gas turbine, have been very difficult to justify. They have therefoe recommended the review of sale of the power assets and the government of Rivers State has accepted that recommendation.

“Refund of proceeds by Rotimi Amaechi, Chamberlain Peterside, and Augustine Nwokocha. In furtherance of this findings that the sale of the four gas turbines was unjustifiable and against the interest of the government and people of Rivers State.

“The commission recommends that the former governor of Rivers State, Rt. Hon. Rotimi Amaechi, along with his former commissioners for Finance and Power , Dr. Chamberlain Peterside and Augustine Nwokocha, respectively, should be held to account for their roles in the sales of the power generation assets of First Independent Power Limited and the disbursement of the proceeds there from.

“Government accepts this recommendation and directs the office of the Honorable Attorney-General and commissioner for Justice, to promptly set in motion the appropriate machinery for the recovery of the proceeds of the sale of the gas turbines from the former governor, Rotimi Amaechi, and every other persons implicated in the commission’s report,” he said.

However, a leader of the All Progressives Congress (APC) in the state and former Chief Of Staff Rivers State, Glory Emeh, while reacting to the development, expressed the view that the sale of the gas turbines was the right thing to do.

There are expectations that the fallout of the report of the judicial panel of inquiry would produce more controversy.