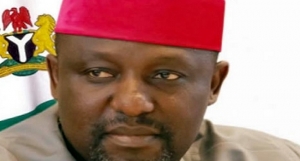 The Supreme Court has dismissed appeal by the Peoples Democratic Party’s governorship candidate in the April 11, 2015 election in Imo State, Mr Emeka Ihedioha, challenging the election of Governor Rochas Okorocha.

The seven-man panel of the Supreme Court presided over by Justice John Fabiyi, held that Ihedioha’s appeal lacked merit.

The Apex Court affirmed the judgment of the Court of Appeal in Owerri to the effect that Ihedioha’s failure to properly serve Okorocha, his party, the All Progressives Congress, and other parties in the suit had robbed the Appeal Court’s jurisdiction to hear the case.

The Supreme Court also held that failure to indicate the addresses of other respondents on the processes of the appeal was injurious to the case.

The immediate past Deputy Speaker of the House of Representatives, had appealed against the ruling of the Imo State Governorship Election Petition Tribunal which dismissed his petition ‎on the grounds that it was incompetence and contravenes the electoral act.

He appealed to the Court of Appeal which also on ‎September 3, 2015 dismissed the appeal against the ruling of the tribunal

The judgment of the Supreme Court lays to rest contention about the April 11, 2015 governorship election in the state.