Russia Suspends All Flights To Egypt 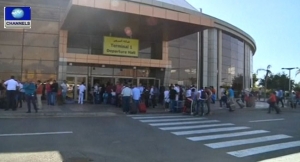 Russia’s President, Vladimir Putin, on Friday ordered the suspension of all Russian passenger flights to Egypt until the cause of a deadly plane crash at the weekend was established.

An Airbus A321, operated by a Russian carrier, crashed on Saturday over Egypt’s Sinai Peninsula. All 224 people on board were killed.

Putin’s decision followed decisions by Britain and others to suspend flights to and from Sharm al-Sheikh, the Egyptian resort where the downed Russian airliner originated, may be the first sign that Moscow is attaching credibility to the theory that Islamist militants somehow planted a bomb on the aircraft.

However, the Kremlin said the decision did not mean the crash was caused by a terrorist attack.

Reuters reports that Putin acted after Alexander Bortnikov, the head of Russia’s FSB security service, recommended that Russia suspend all passenger flights to Egypt until it knew exactly what caused the crash.

Putin’s spokesman, Dmitry Peskov, told reporters that “he head of state agreed with these recommendations”.

He said the government would find a way to bring Russians back home and would open talks with Egyptian authorities to guarantee flight safety.

A Sinai-based group affiliated with Islamic State, the militants who have seized swathes of Iraq and Syria, has claimed responsibility for the crash, which, if confirmed, would make it the jihadist organization’s first attack on civil aviation.

Putin Meets Erdogan Over S-400 Missile Deal Amid US Concern