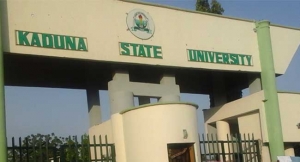 Medical students of the Kaduna State University (KASU) have staged a peaceful protest over the non-accreditation of their courses by the Medical and Dental Council of Nigeria (MDCN).

The students, who took their protest to the Kaduna State Government House, complained that the failure of the previous administrations in the state to build a teaching hospital for their clinical training is what is delaying the accreditation of their courses and continued stay in school.

Numbering over 100 and clad in their laboratory coats, they stormed the Government House early in the morning, blocking the entrance gate, chanting and brandishing placards with different inscriptions.

They demanded to see the State Governor, Nasir El-rufai to present their grievances to him but the Governor was said to be unavailable.

The students said that it presently takes an upward of three years, instead of one, for a medical student to move from one class to another in the state university due to poor facilities and non-accreditation of their courses by the Medical and Dental Council of Nigeria (MDCN).

They stated that there was no hope of getting MDCN accreditation by the end of 2015 due to the lack of a standard teaching hospital and inadequate personnel.

They vowed to continue with the protests until the government and the school authority address these issues and save them from being left stranded for too long in the course of their academic career.

Meanwhile, the Kaduna State Commissioner for Health, Professor Jonathan Nok, has pleaded with the students to exercise patience as the state government is working very hard to ensure the speedy completion of the teaching hospital.

He explained that government has committed so much funds to the procurement of state-of-the-art medical equipment and upgrading of other facilities at the hospital, as part of effort at ensuring the accreditation of the university’s medical faculty by the MDCN.