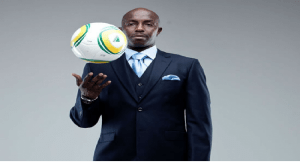 Dream Team VI Coach, Samson Siasia, has revealed that his team will go into Saturday’s final game against Algeria in a more relaxed mood, after qualifying for Rio 2016 Olympics.

Siasia said he is very happy to be in the finals of the CAF U-23 Nations Cup.

He said that the tournament has been a very long journey, with a lot of ups and downs.

The team captain, Azubuike Okechukwu, who just served out his one -match suspension, dismissed insinuations that the players are under pressure to win the Africa U-23 Cup of Nations, but that they will ensure they do the country proud.

Taiwo Awoniyi will also be feature in the Algeria clash. The striker is back in training after an ankle injury kept him out of Wednesday’s semi-final against hosts, Senegal.

Saturday’s clash will make it the third time both teams will meet at the U-23 level since the inaugural competition in Morocco in 2011.

Nigeria thrashed the North Africans 4-1 four years ago, before they played a goalless draw in a group game in Senegal.