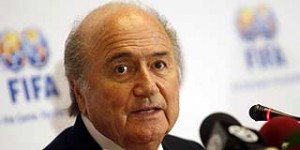 Suspended FIFA President, Sepp Blatter, has arrived at FIFA Headquarters in Zurich for his hearing before the group’s ethics panel.

FIFA investigators in November, called for sanctions against Blatter and European football chief, Michel Platini, both of whom were suspended from their posts for 90 days pending a full investigation.

Blatter has reiterated that a two million dollars payment from FIFA to Platini, when he was running for re-election was legitimate and resulted from a verbal contract for work Platini had done for the organisation years before.

The payment was made in February 2011 for work the Frenchman carried out as Blatter’s Technical Advisor between 1999 and 2002.

FIFA’s ethics panel is set to rule on their cases next week, and could impose much longer bans than the provisional suspensions if it finds the men guilty of violations.

The 79-year-old Blatter suspended from his duties as FIFA President has denied any wrongdoing, calling the investigation into his conduct as “outrageous”.

The suspended FIFA President had responded to his provisional suspension, claiming that the ethics committee “did not follow the code of ethics and disciplinary code”.

Blatter Arrives In Russia For World Cup Despite FIFA Ban