Agbakoba Says Nigeria Should Search For Wealth Creators Not Borrow 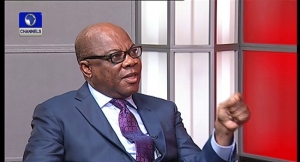 Senior Advocate of Nigeria, (SAN) Olisa Agbakoba has advised the federal government to search for Nigerians who can make money  for the country rather than borrow or loan money from the IMF.

Mr Agbakoba was speaking on Channels Television’s breakfast programme, Sunrise Daily, where the conversation bordered on the economy and how Nigeria can create wealth.

He said “There are lots of people in their states that are richer than the federal government and these are the people the government should look for.

“What the government should do is to bring out the Nigerians that are making money.”

The renowned lawyer said that there were some fundamental factors affecting wealth creation in the country, such as legal framework, bad economic policies, corruption amongst other factors.

Mr Agbakoba noted that the issue of subsidy should also be managed properly because it is part of the issues affecting Nigeria’s economy.

He also commented on the visit by the president of the International Monetary Funds ( IMF) Christiane Lagarde and her view on Nigeria’s economy.

Using the Republican presidential candidate in the United States, Donald Trump as an example of a wealth creator in America, the lawyer advocated the need for President Muhammadu Buhari and the government as a whole to look inwards in order to create wealth rather than borrowing.

Mr. Agbakoba insisted that Nigeria does not need the IMF funds but rather needs to search for wealth creators in the country.

#RevolutionNow Not A Protest, It Is A Child’s Play – Adesina

Trump Ushered From Briefing After Shots Fired Near White House