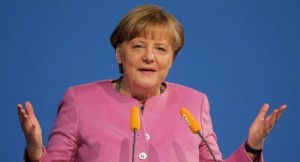 German Chancellor, Angela Merkel, says she will consider changes to make it easier to deport migrants, who commit crimes after sex attacks on women in Cologne.

The attacks on New Year’s eve, which shocked the country, has sparked a debate about Germany’s open-door policy on migrants.

The police handling of the events has also been sharply criticised resulting to the head of the city police force’s suspension from his duties.

Under current German laws, asylum seekers are only forcibly sent back if they have been sentenced to at least three years, providing their lives are not at risk in their countries of origin.

The BBC reported that German officials had warned that anti-immigrant groups have been trying to use the attacks to stir up hatred.

Similar attacks to those seen in Cologne were also reported in Hamburg and in Stuttgart on New Year’s Eve.

As the investigation into the Cologne attacks continues, federal authorities said that they have identified 18 asylum-seekers among 31 suspects. But they were suspected of theft and violence, but not sexual assault.

The suspects include nine Algerians, eight Moroccans, four Syrians, five Iranians, two Germans and one each from the US.

Biden, Harris Launch Campaign With Call To ‘Rebuild’ Post-Trump US