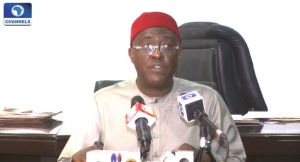 The Peoples Democratic Party caucus in the House of Representatives has given the Economic and Financial Crimes Commission (EFCC) 48 hours to release the spokesman of the party, Mr Olisah Metuh, or charge him to court.

Led by the Minority Leader of the House, Representative Leo Ogor, the group said Mr Metuh has not committed any treasonable offence and should not be detained indefinitely.

Threatening to give the issue an international dimension should he be kept in detention without bail, the caucus said “the continued incarceration of the party’s spokesperson violates the law and borders on witch hunt”.

Mr Metuh has been in the custody of the EFCC for 10 days now.

Mr Metuh was arrested over an alleged 400 million Naira reportedly traced to his company’s accounts from the $2.1 billion meant for the purchase of arms by the last administration to fight insurgency.

The anti-graft agency has asked him to return the money to effect his release.

But a caucus of his party in the House of Representatives is demanding that Mr Metuh be released within the next 48 hours or be charged to court as prove that the arrest was not witch hunt of the past administration.

In defence of the continued detention, however, a member of the ruling All Progressives Congress (APC), Mr Parry Ariase, said the operations of the EFFC were backed by the courts and the ultimatum given by his party could only apply at the expiration of the court’s order.

Another issue raised by the PDP caucus is what the members in the House of Representatives termed preferential treatment given to a member of the ruling party, Mr Jafaru Isa who was also arrested over the same diversion of funds but released eight hours later.

But Mr Ariase argued that the APC member in question was released after he refunded part of the money he collected illegally from the office of national security adviser and that he still has a case to answer.

On Monday, a Lagos lawyer sued the EFCC and the Federal Government for Mr Metuh’s continued detention, saying it was a violation of his rights.