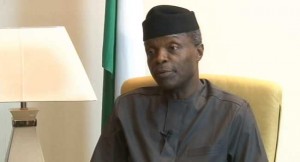 Speaking to Channels Television’s Chamberlain Usoh in an exclusive interview, Prof. Osinbajo said that a special protection programme aimed at addressing unemployment will be implemented.

The government has emphasized the importance of mobilizing domestic revenue to enable significant spending on social investment to the extent that 10% of the budget is going to be used for social protection programmes.

These will include training for 500,000 teachers, micro-credit scheme for 300,000 market women and several other youth empowerment programmes.

“Our youth employment is very crucial. We think that for graduate employment, the direct creation of jobs – the 500,000 teachers – will address some of that concern but for those who are not graduates, we are looking at investing in that also substantially.

“How we intend to do that is by this youth employment scheme,” he said.

Investment in infrastructural development has also been identified as a key component to economic growth and our correspondent sought to know what kind of attention the Federal Government was paying to this.

Prof Osinbajo said, “That’s why we are spending so much money on infrastructure and that’s power. We are going to spend a lot of money on power. If you look at our whole capital spend in this (2016) budget, it is directed at ensuring that we are able to improve the economy significantly.”

With the country’s revenue profile taking a hit because of the dependence on oil, the VP said that one of the critical sectors for Nigeria is the agro-allied value chain which the Buhari administration wants to also improve significantly.

“If you look at rice for example, we are looking at milling and how we can ensure that there is more investment in silos storage and also in milling.

“It is important to us that Agriculture is not a government business and what is crucial is that we create an environment and bring in private partnership.”

Professor Osinbajo also stressed that the cash transfer promised during the campaign of the All Progressives Congress (APC) was meant for the poorest in the society and not for the unemployed people, as popularly believed.