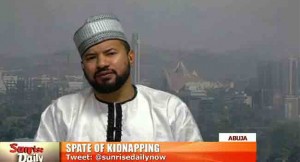 A Security Consultant says financial motivation remains a major challenge of security services in Nigeria in spite of efforts by the government.

Mr Mukhtar Dan’Iyan said this on Channels Television’s Sunrise Daily where he discussed the spate of kidnapping in Nigeria.

“It is very difficult for people to put their lives on the line when they feel that their welfare is not being properly taken care of,” he said.

He pointed out that when things go wrong for security agents in service, their families lose out completely most of the times and this affects their commitment to the fight against kidnapping and other crimes.

The security consultant also advised that in order to resolve the cases of kidnapping, there should be opportunities for young people to be gainfully employed either through the government or private enterprise.

“A lot of studies have shown that young people who are engaged in their communities via commerce or other enterprise are less likely to engage in crime,” he said.

Asides advising the government to ensure that youths are able to work and make money legitimately, he also advised the Police to involve more in community policing.

Dan’Iyan went further to say that the Nigerian Police needs to be looked into, claiming that the challenge with the Nigerian Police Force is “a large number (of Policemen) are involved in duties that have nothing to do with policing, including providing security to very important people.”

Mr Dan’Iyan, however, admitted that the nation is making some headway with the recent partnership of the Nigerian Police with United Kingdom, China, Italy and the United States of America to address the challenges of kidnapping and other organised crimes.

He explained that “the fact that the Nigeria Police Force is ruled under the Interior Ministry is a very positive step” because internal security, outside of the military, has been brought under same management.

The security consultant also commended the Interior Minister, Abdulrahman Dambazau, for being focused on reorienting the internal security services in the nation.

He added, “The fact that the Police is now going to be involved in operations in the northeast more than ever before, is a step in the right direction.”