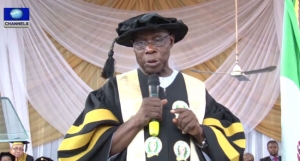 Former President of Nigeria, Olusegun Obasanjo, has called on Nigerians to jettison the thoughts that the 276 girls abducted by the Boko Haram sect in Chibok town of Borno State in 2014 ‎could ever be rescued.

The former President said this while addressing a crowd of the students, lecturers and the Vice Chancellor of the Obafemi Awolowo University, Professor Bamitale Omole, at the university’s Staff Club in Ile-Ife, Osun State, in southwest Nigeria.

In his speech on the “Reflections of an Elder Statesman”, he stressed that the major problem affecting the development of the nation was lack of continuity.

Mr Obasanjo also pointed out that if the fight against corruption must be entrenched, it has to start from the top government functionaries down the ladder.

He noted that the present organs that was being used to fight corruption – the Economic Financial Crimes Commission – was put in place because of the prevailing existence of corruption when he was in power.

Before his arrival at the venue of the lecture, the former President had visited the palace of the Ooni of Ife‎, His Imperial Majesty, Oba Adeyeye Ogunmuko, Ojaja II, to pay homage to the monarch.