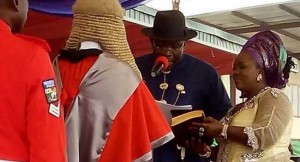 Governor Seriake Dickson has offered an olive branch to the opposition political party to join him in what he calls consolidation of his achievements of the first four years as Governor of the state.

He made this revelation at the Samson Siasia Sports Complex in Yenagoa as he and his Deputy, Rear Admiral Johnson Jonah (Rtd), took the oath of office for another four years.

Governor Dickson thanked Bayelsans for the overwhelming support during the elections.

He assured the people that he would consolidate on the gains of his first tenure and also ensure more rural development.

He promised to do more in the areas of road development and electrification of communities yet to benefit from his light up the state programmes.

Chief Judge of the state, Kate Abiri, presided over the oath taking ceremony.

Members of the Nigerian Police who wore their ceremonial regalia performed the ceremonial parade while the Governor inspected the guard of honour.

The programme, which many say was well attended, had all PDP governors in attendance.

The acting Chairman of the party, Uche Secondus, members of the National Assembly elected on the platform of the PDP, traditional rulers and other citizens were also present at the event.