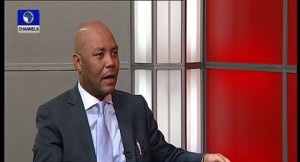 A Nigerian Energy Economist has given some clues as to what might be affecting the country’s dwindling economy.

Approaching the problem of the dwindling economy from the energy sector, Mr Onuoha Nnachi said that there are two key factors affecting the oil price which in turn, affects the Nigerian economy.

Speaking on Channels Television’s Sunrise Daily on Friday, Mr Nnachi said: “The evolution of shale gas oil production and the crisis across the Middle East, have deeply affected the Nigerian economy.

“Before the shale production started, the shale existence has been known to everybody in the industry, but the technology that would allow you do the drilling, was very high in terms of cost – the cost has been driven by the United State technologist, who had invested so much in his research,” he explained.

Giving his opinion about the increase in price of crude oil, the Energy Economist stated that the government should create higher demand of the crude oil.

“One of the key options in creating higher demand is to increase the energy consumption of the globe, the developed country should be pushed to development.

“Africa stands a chance of benefiting from the development in terms of increasing energy demand,” he said.

Answering a question on what the country has done so far to solve the problem of dwindling economy, Mr Nnachi said that “the situation today, is redefining the global alliance and that is a new evolution of the world, we have to accept it.

“Today, global alliance is shifting – oil no longer moves from the Middle East to North America, South and back to Europe.

“Coming down to our own nation, people have said in time past that Nigeria is not an oil nation, but a gas station, what have we done about our gas?,” he asked.

“Experts said we have done 187 trillion cubic feet reserved – this number has been taunted for many years which implies that we are not increasing it.

” The reserve has been a result of accidental gas – gas that was discovered while drilling oil,” he said.

“Some state governors are being threatened by persons that want to build refineries in their states.

“The refinery module development has three points that is very critical – you have to edge the supply, you must have an off taker’s agreement before funding the project.

“But today, most people who plan to build refineries may not have the edge supply, off taker’s agreement,” he added.