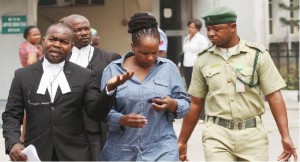 The convict was arraigned by the Economic and Financial Crimes Commission (EFCC) on February 1, 2016 after her arrest at the Murtala Muhammed International Airport.

The convict had earlier pleaded ‘not guilty’, but changed her plea to ‘guilty’ and was consequently convicted by the court on Friday.

Justice Olatoregun ordered that the convict forfeit the entire sum of $374,355.00 to the Federal Government of Nigeria.

The judge also ordered the EFCC to remit the money to the Federal Government Account within 29 days and file notice of remittance at the court.

Justice Olatoregun admonished the convict to shun illegality in the future.