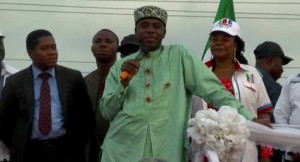 The people of Rivers State have been urged to reciprocate Federal government’s commitment to the implementation of the UNEP report by voting in the All Progressives Congress (APC) candidates in Saturday’s senatorial rerun elections.

This appeal was made on Tuesday by the leader of the APC delegation to Rivers State and the Minister of Transportation, Chibuike Amaechi, during the grand finale of the Rivers State rerun elections rally in Gokana Local Government Area.

Mr Amaechi, while canvassing for massive support for the APC candidate also disclosed that one billion dollars has been released by the federal government for the clean-up of Ogoni land.

He said this at an earlier held town hall meeting which had in attendance the former Rivers State Governor, Mr Chibuike Amaechi.

The Minister also assured eligible voters that adequate security has been provided by the federal government during the polls.