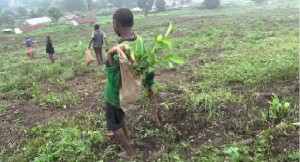 The Kwara State Command of the Nigerian Immigration has rescued 20 minor boys, who were used as labourers in farms at Kaiama Local Government of the state.

Parading the boys and the accused farmer who hired them on Wednesday, the State Controller, Mrs Abimbola Abiodun-ojo, said that the Command had been having running battles with the Yoruba farmers in the area, as one of the officers was recently beaten to a pulp for daring to challenge them on the illegal hiring of the minors.

Briefing reporters, Mrs Abiodun-ojo noted that her officers went for routine mop exercise when they met the boys on the farm working.

She said that the boys had been conditioned to believe that they would be given a motorcycle each in exchange for the hard labour.

While 15 of them are from Benin Republic, three are from Togo and remaining two from Burkina Faso.

The Immigration boss said the boys would be handed over to the National Agency for the Prohibition of Trafficking in Persons for proper prosecution.

Mrs Abiodun-ojo urged parents to be vigilant and know what they are doing, adding that the children could learn trade instead of being idle.

The alleged farmer, Muraina Salihu, admitted that he only engaged three of the boys and claimed ignorance of the others.

Speaking in Yoruba, Salihu said he had been in the business of hiring the boys for long, adding that he hailed from Ilorin and had been farming in Kaiama for years.