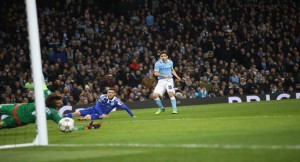 Manchester City on Tuesday reached the quarter-finals of the Champions League for the first time despite a second leg goalless draw against Dynamo Kiev.

City which were 3-1 up from the first leg, were in control of the tie but lost centre-backs Vincent Kompany and Nicolas Otamendi to injury early on.

In the first half of the second leg match no shot on target was recorded by either side.

Jesus Navas hit the post with a low drive in the second half for City and Yaya Toure shot straight at the keeper.

The English side lost several other chances.

Pellegrini has made history by taking City further in the competition than any other manager.

They will want to avoid Barcelona in the draw for the next round – should the holders complete the job against Arsenal on Wednesday – having been knocked out by the current Spanish champions in each of the last two seasons.

It was just as well that City had done the damage in the first leg, as this was a desperately poor performance against a Kiev side who have never won in England.

With the match feeling almost like a testimonial for long spells, neither striker Sergio Aguero nor midfielder Toure could exert their influence.

The BBC reports that Injuries to both of City’s first-choice centre-backs will be of big concern to the home supporters.

Kompany misjudged a long ball forward and pulled up after turning to retrieve the situation.

He slumped to the ground and knew straight away he had suffered another setback, with manager Pellegrini confirming his captain had picked up another calf injury – the 14th he has suffered since joining the club in 2008.

Kompany has played 19 of City’s 46 matches this season, and the statistics show they are worse off when he is missing.

We Are Ready To Face Liverpool- Arteta