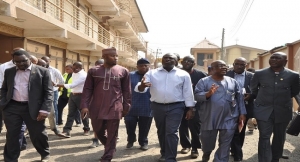 The Lagos State government has re-opened the mile 12 market, which was shut following a violent clash in Agiliti area.

Governor Akinwunmi Ambode, announced the re-opening of the market on Thursday, weeks after it was shut down.

The State’s Commissioner for Information and Strategy, Steve Ayorinde, said the decision to re-open the market was reached after a meeting with stakeholders.


He told reporters that agreement was reached with all stakeholders including, traditional leaders, residents and the community development association.

Some agreements reached include: a prohibition on no street trading in the area; all activities relating to the market would take place within designated market premises; a ban on commercial motorcyclists in the area and removal of shanties and illegal structures.

“Relocation Of The Market”

The Commissioner said: “As part of measures aimed at bringing sanity into the market, the government and the market leaders have agreed that henceforth, all activities relating to the market shall be confined within the market area, and that street trading would no longer be allowed in the area”.

The Commissioner added that it was further agreed trading activities in the market would henceforth be carried out in a clean and hygienic environment.

According to Ayorinde, other major agreements arrived with a consensus amongst the various stakeholders include: “Relocation of the Market to another suitable location as the existing market can no longer contain the traders; ban on the use of Commercial Motorcycles (Okada Riders) in the area; peaceful co-existence amongst all ethnic groups in the Market and environs; and removal of all shanties and illegal attachments/structures within the Market area.”

Ayorinde further said that the stakeholders agreed that it was only in an atmosphere of peace and co-existence that their various business and trade can thrive.

He assured the stakeholders that Lagos was a home for all, and that the State Government would continue to provide the enabling environment for every investor to thrive, as the promise of the Governor to run a 24/7 economy is sacrosanct.

Governor Ambode had shut the market on March 3, 2016, after a clash between residents and Okada operators in the Mile 12 area led to loss of lives and property.