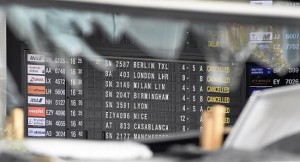 A third man caught on CCTV footage with two bombers who attacked Brussels airport on Tuesday was named as Faycal Cheffou in Belgian media on Saturday.

The federal prosecutor’s office could not immediately be reached for comment.

In a statement on Friday, it had named as “Faycal C” one of three men police had detained near the federal prosecutor’s office, the heavily guarded center of the investigation effort.

It did not say, however, whether he was the third man, seen on CCTV footage wearing a hat and a light jacket at Brussels airport with two other suspects believed to have blown themselves up.

Le Soir newspaper said Faycal C was identified by a taxi driver who drove the attackers to the airport. Earlier it had quoted police sources as saying it was highly likely Faycal Cheffou was the third man.

Other media also carried similar reports and said Cheffou was a freelance journalist.

Nine people in total have been arrested since Thursday in Belgium and two in Germany, as European authorities swoop on Islamic State militants they link to the Brussels bombings that killed 31 people and to the attacks in Paris last November that killed 130