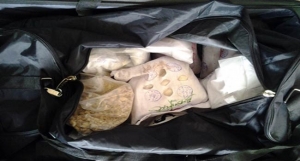 The Kano State government on Wednesday led the destruction of hard, fake and counterfeit drugs worth 31.8 billion Naira arrested by the Kano state police command.

Destroying the drugs, Governor Abdullahi Ganduje said he had directed the State Chief Judge and Grand Kadi to ensure that suspected drug dealers and addicts were prosecuted without fear or favour and in accordance with the law.

Kano State is still on the top list of the National Drug Law Enforcement Agency, as a sate with the highest drug consuming record in Nigeria.

The State Governor, the State Police Commissioner and members of the State Executive Council set ablaze about 8,974 cartons of hard drugs comprising cocaine, Indian hemp, and other intoxicating substances seized by the police at various occasions across Kano State.

Mr Ganduje also urged youths to desist from dealing in drugs and key into government various empowerment programme, as there would be no hiding place for drugs dealers and addicts in the commercial city of Kano.

He further said that his government had already empowered the State Reformatory Institute to rehabilitate drug addicts and integrate them back into the society.

According to him, training in different skills and startup capital would also be given to the rehabilitated addicts.

Briefing the Governor on the command’s activities in recent times, the State Police Commissioner, Musa Katsina, said the drugs seized comprise of 2,818 bags of Indian hemp, 11,399 compressed wraps of Spiro gyrations as well as different brand of other intoxicating substances.

The commissioner also told reporters that so far, 361 suspects were arrested and that 211 of them were charged and remanded in prison.

Although Kano State Government in collaboration with other law enforcement agencies are still coming to terms with the increasing cases of illicit drug trading  and abuse.

Efforts are, however, still required to remove Kano state from the NILE list which rank Kano number one state in drug trading and consumption in Nigeria.

Let Whoever Offered Me Bribe, Come Out – Magu