Collaboration With John Legend In The Works – Praiz 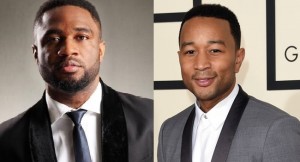 RnB singer, Praiz is working on a major collaboration with Grammy Award winning singer, John Legend, an EP and a second album, which has been titled ‘Out Of Africa’.

In an exclusive interview with Entertainment News on Channels Television, the singer who is a John Legend fan, revealed that he is currently in talks with the ‘All Of Me’ crooner.

Praiz also talked about his plans to promote talented new acts in the industry, as his way of giving them an opportunity to become big shots in the music industry.

“I’m looking for eight talented underground artistes that I think deserve that platform and I’m going to feature them on the EP. I’m going to shoot videos to promote them and put their faces out there. Try and do a radio tour and introduce the world to this new acts,” he said.

His album, which he said is titled ‘Out of Africa’, would also contain collaborations with a number of artistes from different parts Africa from the north, central, west, east and south.

“It’s also to just promote our continent; promote the culture of this continent – music, dance, emotions, everything about Africa”, Praiz said.