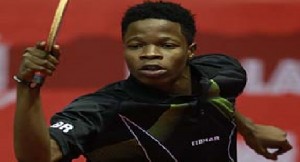 Olajide Omotayo and Fatimo Bello have emerged winners in the qualifiers for the 2016 ITTF World Tour tagged Nigerian Open.

The competition featured over 106 male and 48 female players at the National Training Centre of the National Stadium in Lagos.

To win the men’s event, Omotayo was merciless in the final against an experienced Kazeem Makanjuola with a 4-0 bashing to emerge as the new national champion.

The speed and skills of Omotayo were beyond Makanjuola in the entertaining encounter, as Bello had to rely on experience to defeat Oribamise in the women’s final.

Beside Omotayo and Makanjuola, others that made it to the top four in the men’s event were Oladele Kehinde and unknown Akanbi Rilwan.

The top four finishers have also secured their places at the 2016 ITTF Nigerian Open scheduled for May 18 to 22 at the Teslim Balogun Stadium in Lagos.

The referee of the tournament, John Peters, said that the players gave good account of themselves.

He identified Nimota Aregbesola as the major discovery after edging out the number one seed, Halimot Hussein in the quarterfinal as well as another top seed, Sidikat Yaya in the round of 16.

Nobody Has Been Licenced To Run Okada Services – Lagos Govt