UNILAG Shuts Down Over Protests Of Fuel, Water Shortage 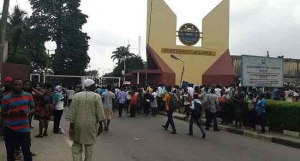 The management of the University of Lagos (UNILAG) has ordered that all academic activities on the campus be suspended until the situation on the campus improves.

According to a statement released on Friday, the decision was made at a meeting of the University Senate held on Thursday.

“The Senate of the University of Lagos at an emergency meeting on Thursday, April 7, 2016 considered the situation on campus occasioned by the ongoing agitation of the student body over poor electricity and water supply in the community, and the difficulty faced by a large number of students living off campus to attend classes as a result of the fuel crisis.

“Senate noted that the problem of poor municipal services is a national issue that governments at both State and Federal levels are addressing,” the statement read.

The management said that a decision to re-open for normal academic activities would be taken as soon as ‘municipal services improve’.