The Change You Voted For Is Real – Lai Mohammed 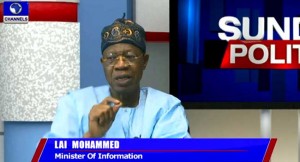 The Minister of Information, Mr Lai Mohammed, has assured Nigerians that the change they voted for is real and good life awaits all citizens once the planning stage is over.

He said that he was aware that many Nigerians are already doubting the APC’s promise of ‘change’ but the 2016 budget is a statement that clearly explains the Nigerian government’s economic direction and plan for the citizens.

He said this in response to questions about the economic policies of the Buhari-led administration while speaking on Sunday Politics on Channels Television.

He explained that 40% of all expenditure in the budget has been dedicated to capital projects which are roads, power, railroads and other infrastructure.

Asides helping to reflate the economy, Mr Mohammed said that this is expected to create an enabling environment for the manufacturing sector and ultimately strengthen the non-oil sector.

“If you look at our budget for 2016, this is the first time in Nigeria that the government has gone for what I call an inclusive budget. This is where everybody is taken care of.

“Before now, you do not see this social inclusion in our budget. You have small pockets of alleviation of poverty here and there but for the first time the government is taking a bold step to set aside the sum of 500 billion Naira for social intervention,” he said.

Doubts about how realistic the social intervention plan is led the Minister to explain the ways in which the government hopes to execute the project which he insisted had been well worked out.

The Need To Borrow

As more Nigerians continue to question the rationale behind President Muhammadu Buhari’s trips abroad, the Minister of Information and Culture, Lai Mohammed said Nigeria does not have an option for now as the government needs to rejig the economy.

He explained that the revenue of the country has dropped significantly and rejigging the economy can only be done through help from other nations.

The decision of the government to borrow has also received heavy criticisms from Nigerians and the opposition political parties but Alhaji Mohammed said that the decision is justified.

“There is no way, in the situation we have found ourselves, that we will not run a deficit budget. When your income is not enough to cover your expenditure, you borrow but what is important is what you do with the money you borrowed.

“Whatever money we borrow today is not going to be used for recurrent expenditure. It is going to be invested in railroads, roads, power, providing infrastructure for agriculture and solid minerals.”

He declared that indeed the President would be negotiating a loan on his trip to China, adding emphatically that there is no apology for the decision.

Although he would not state specifically how much the President would be hoping to borrow from China, he said that the country had a deficit of about two to three trillion Naira, explaining further that if Nigeria had been able to generate enough income the APC government would not have considered borrowing.

“What do you expect us to do? When we were earning 100 dollar per barrel, we had the same workforce as today when we are earning 40 dollars per barrel.

“When we had 100 dollars per barrel we had the same overhead as we have today and we still have to maintain the same infrastructure and still improve on it. Of course there is no other way than borrowing.”

Mr Mohammed also condemned the criticisms trailing the decision to borrow, stating that the Federal Government deserves some credit for the manner in which it has managed the nation’s economy in the face of dwindling revenue, “otherwise the situation would be worse by now”.

He cited the introduction of the Treasury Single Account (TSA) as a move that has shored up the finances of the government. He said that the Buhari administration has also brought more discipline into government and has been “able to block so much leakages”.

He gave the assurance that the government is very careful not to go beyond the ratio of debt to income, “I know that whatever we borrow today is within the limit and capacity of government to pay.”

President Muhammadu Buhari has travelled to China and the Presidency has explained that the trip is aimed at securing greater support from Beijing for the development of Nigeria’s infrastructure, especially in the power, roads, railways, aviation, water supply and housing sectors.

The Minister also had some words of appreciation and encouragement for Nigerians who have had to endure weeks of hardship due to the fuel scarcity across the states.

Alhaji Lai Mohammed empathized with Nigerians on the pains they have gone through over the last one month as federal authorities are doing everything within their powers to normalize the situation.

“I have said it on many fora that the government is keenly aware of the hardship and difficulties Nigerians have gone through in the last couple of weeks and we do empathize with them. 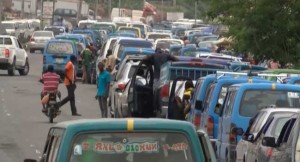 “Not only do we empathize with them but we appreciate their perseverance and we have also been working round the clock to ensure that we are able to bring the situation back to normal,” he said.

He said that the efforts have paid off as the fuel situation was gradually being normalized with cargoes of refined product being discharged in major cities across the country.

In addition, the Warri refinery, according to the Minister of Information has since been working and has 19 million litres of the product, helping to put the quantity of product in the reserve to 430 million litres.

“As from tomorrow we are going to deploy 1,300 trucks all over Nigeria to ensure that the fuel situation gets much better,” he said, expressing confidence that this quantity being distributed daily would put an end to the fuel scarcity.

“We empathize with Nigerians, we salute their courage and perseverance and I want to assure them that the change they voted for is real, that change will come and that all the challenges we are facing today are very temporary.”

The Minster went further to name the lack of foreign exchange and the crash in the price of crude which has been Nigeria’s only source of revenue as factors responsible for the fuel situation.

He also said that the federal government plans to build modular refineries to further boost the availability of the product.

NJC Recommends Appointment Of 22 Judges For Supreme Court, Others