Government’s Primary Role Is To Provide Security, Welfare For The People – Ezekwesili 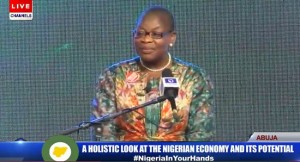 A former Vice President of the World Bank, Oby Ezekwesili, says the primary purpose of government is to provide security of lives and property, as well as improve the welfare of the Nigerian people.

She said this is according to the Constitution of Nigeria and government, which is a system or function that combines political, social and economic actions in order to solve the problems of the people.

Mrs Ezekwesili made this known as a speaker on ‘The Platform’ with the theme, Nigeria, what is in your hands? Tapping into out dead economy, looking beyond our oil driven economy”

Economy Of The Nation

Speaking on the economy of the nation, she said “from the 90s till now the capitalist system has proven to be very enduring in producing global prosperity, as well as national prosperity at all levels of economic management and has not succeeded in delivering”.

With a look at the global reduction in poverty, she noted that China used to suffer from 80% poverty but that since they commenced market reforms, less than 30 years after, China lifted 600 million citizens out of poverty.

“China accounts for most of the global reduction in poverty that we know, they used to have 85% of citizens poor but today it records about 13% poverty,” she told the gathering.

Another country she compared to Nigeria was Singapore, pointing out that the country had sound policies, strong institutions, effective and efficient investment which had built itself to an income of per capital of 55,000 Dollars but today Nigeria has 3,200 Dollars per capital.

China Bans Some Food Imports After Coronavirus Detected On Shrimp