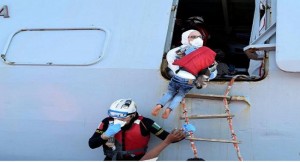 Italian vessels have helped rescue nearly 1,800 migrants from boats trying to reach Italy from north Africa in the last 24 hours, the navy said on Friday, indicating that numbers are rising, as the weather warms up.

The Italian frigate Grecale was taking the migrants to the Sicilian port of Augusta, where they were expected to arrive on Saturday morning, a navy statement quoted by Reuters said. It gave no details of their nationalities.

The latest arrivals picked up in the Strait of Sicily will bring the total of migrants reaching Italy by boat so far this year to more than 30,000, slightly higher than in the same period of 2015.

Humanitarian organisations say the sea route between Libya and Italy is now the main route for asylum seekers heading for Europe, after an EU deal with Turkey dramatically slowed the flow of people reaching Greece.

Officials fear the numbers trying to make the crossing to southern Italy will increase, as sailing conditions improve in warmer weather.

More than 1.2 million Arab, African and Asian migrants fleeing war and poverty have streamed into the European Union since the start of last year.

Most of those trying to reach Italy leave the coast of Libya on rickety fishing boats or rubber dinghies, heading for the Italian island of Lampedusa, which is close to Tunisia, or toward Sicily.

On Wednesday, however, Italy’s coastguard said it had rescued 42 migrants from a sailboat off the coast of Puglia, in the southeastern heel of mainland Italy.