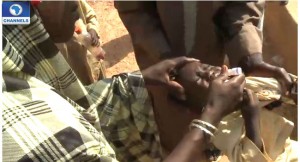 The Yobe state Deputy Governor Abubakar Aliyu has led the state taskforce on immunisation and primary healthcare campaign in each Local Government Area of the state.

The team visited Machina Local Government Area, some 307 Kilometres away from Damaturu the state capital where residents were enlightened on the significance of immunisation against the five child killer diseases.

While in Machina town, the deputy governor held discussions with the Emir of Machina, District and Village Heads as well as opinion leaders of the area on the need to educate their subjects on the importance.

The Deputy Governor who briefed the people at the Emir’s palace and later at the various immunisation centres visited within Machina town, urged the people to always observe the IPD and the routine Immunisation.

He said the country has recorded over two years of polio free and the campaign tour is to strengthen the good record the state has over the years.

The Deputy Governor commended the people of Machina, the staff, those of the Ministry of Health and Primary Health Care for their commitment towards maintaining polio free and assured that the state government will continue to play its part in ensuring success of the exercise.

The Emir of Machina His Royal Highness Alhaji Bukar Machinama appreciated the efforts of the committee and assured to further mobilise his subjects to ensure the success of the campaign.

He stated that though Machina terrain is the cause of non-compliance to the programme in the area, the efforts of state government towards road construction will assist greatly towards the success of the campaign.

The immunisation Plus Days (IPD) currently going on across the state will last for four days running.

The Yobe state Government, two months ago inaugurated the state taskforce on immunisation with the aim of raising the routine coverage in the state.