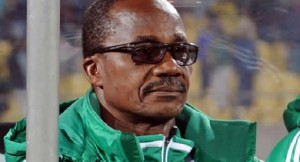 Kadiri Ikhana on Monday resigned as the Head Coach of the Nigeria Professional Football League (NPFL) side, Shooting Stars of Ibadan.

The experienced coach joined the Oluyole Warriors at the beginning of the ongoing season.

Ikhana explained that the failure of the management to issue him a contract paper, almost at the end of the first stanza of the league, prompted his decision.

He lamented that the hardship faced by the players was also one of the reasons he decided to take a walk at the Ibadan warlords.

Reacting to this, the General Manager of Shooting Stars, Rasheed Balogun, told Channels Sports that the club was yet to receive any resignation letter from Mr Ikhana.

He added that he was doing his best to ensure that the welfare of the players improves as soon as possible.

Shooting Stars are presently 18 on the NPFL table after being defeated by Wikki Tourists of Bauchi on Sunday.