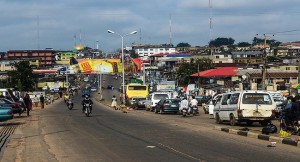 Workers in the commercial city of Kano have defied the directive of the Nigerian Labour Congress (NLC) by opening their offices and businesses.

At the Audu Bako Secretariat all offices were opened for work with market places booming with normal activities.

Motor parks and all filling stations in Kano also opened for business and schools also opened.

Hundreds of policemen were deployed to all the exit and entry points of Kano State.

Although members of the Nigeria Labour Congress were nowhere to be found, unarmed policemen were also seen at the premises of Labour House in Kano.

Meanwhile, the Nigeria Police has said that so far there has been no report of any protest in Kano and that the deployment was to protect the lives and property of Nigerians resident in Kano.

Kano has remained peaceful with activities going on in a conducive atmosphere.

Life also appeared normal in Rivers State despite the strike called by a faction of Nigeria Labour Congress (NLC).

Schools, hospitals, banks and many of the places visited showed no sign of the strike as many of the civil servants in the state secretariat turned up for work.

Some workers who spoke behind camera said that there was no clear cut order to embark on a strike that may jeopardise their pay.

The TUC Chairman in the state, Chika Onuegbu, told Channels Television that the strike in the state was a failed project.

Pipeline Explosion: If Acts Of Vandalism Continue, They Will Kill Us All – Kyari