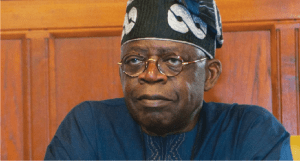 The national leader of the ruling party in Nigeria, the All Progressives Congress (APC), is asking Nigerian workers protesting against the recent increase in the price of petrol to suspend the strike in the overall interest of the nation.

Senator Bola Tinubu made the appeal in Abuja on Friday at‎ a meeting with officials of the Nigeria Labour Congress (NLC).

He told the union that the increasing impoverishment of Nigerians necessitated the increase in the pump price of petrol.

The APC leader further appealed to the officials of the NLC, leading the protest, to return to the negotiating table with the government in order to resolve the issue.

The call for the suspension of the strike was also supported by the Governor of Osun State, Rauf Aregbesola and the Senator representing Kaduna North in the National Assembly, Suleiman Hunkuyi.

Without making any commitment, the President of the NLC, Ayuba Wabba,  criticised the approach of the government to the situation, saying the “government is insincere in its dialogue with two groups over the pump price increase of petrol”.

It is three days now that the leadership of the NLC pulled workers into the streets to protest against the recent increase in the price of petrol.

The Federal Government had on May 11 increased the price of Premium Motor Spirit, also referred to as petrol, from 86 Naira, 50 kobo to 145 Naira.

After the increase was announced by the Minister of State for Petroleum, Dr. Ibe Kachikwu, the labour union said it would resist the increase, describing it as ‘insensitive’.

The government said its decision to increase petrol price would end the worst petrol scarcity that the oil-rich nation had experienced in over a decade.

Dr. Kachikwu said the increase would further lighten the difficulty in getting foreign exchange needed for importation of petrol at a period the nation’s refineries were producing below capacity.

Despite these reasons, the NLC insisted that the government should revert to the old price.

After two days of negotiations, the NLC embarked on strike, but the division in the union’s leadership has made light the impact of the strike.