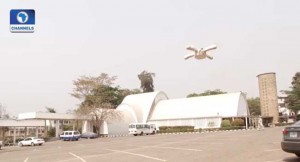 The Kaduna State Government says it has commenced the process of installing Closed-Circuit Television (CCTV) monitors at designated points in the state capital, as well as deploying Unmanned Aerial Vehicles (Drones) to tackle crime in the state.

According to him, the mounting of CCTV at various locations and the deployment of drones for aerial surveillance at flash points would check crime and give the masses a sense of security, thereby enhancing socio-economic activities.

He explained that security operatives would also further be trained to launch the fresh onslaught against criminals in the state.

Meanwhile, the state government has handed over the 403 stolen cows recovered by security operatives to their owners.

The coordinator of the security outfit, said that the 403 rustled cows had been recovered within the last one month.

Similarly, the State Police Command has arrested over 40 armed robbery suspects who specialize in snatching of cars, cattle rustling and stealing household items.