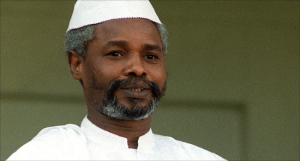 Chad’s ex-ruler, Hissene Habre, has been convicted of crimes against humanity and sentenced to life in prison at a landmark trial in Senegal.

He was convicted of rape, sexual slavery and ordering killings during his rule from 1982 to 1990.

Victims and families of those killed cheered and embraced each other in the courtroom after the verdict was given.

It was the first time an African Union-backed court had tried a former ruler for human rights abuses.

Habre, who received strong backing from the U.S. while in power, has been given 15 days to appeal.

Survivors from the Habre era welcomed the verdict.

“This is a historic day for Chad and for Africa. It is the first time that an African head of state has been found guilty in another African country,” Yamasoum Konar, a representative of one of the victims’ groups, told the BBC.

“This will be a lesson to other dictators in Africa,” he added.

After he was sentenced, Habre remained defiant, raising his arms and shouting to his supporters, as he was led from the courtroom.

“Down with c!” he shouted, using a term which is critical of France’s influence in its former colonies.

Throughout the nine-month trial, he refused to recognise the court’s legitimacy, frequently disrupting proceedings.

The ex-president denied accusations that he ordered the killing of 40,000 people during his rule from 1982 to 1990.

Terrorism: AU Plans Deployment Of 3,000 Troops To Niger, Others